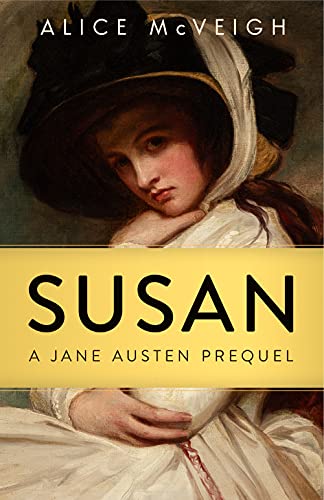 I am very glad to welcome for the first time Alice McVeigh with her latest book Susan, a Jane Austen Prequel. This books shows us a young Susan but we can see how some characters of other books by Jane Austen appear. Here you have the blurb with a reminder of how Jane Austen’s Susan is in her own words:

“She possesses an uncommon union of symmetry, brilliancy, and grace. One is apt to expect that an impudent address will naturally attend an impudent mind – but her countenance is absolutely sweet. I am sorry it is so, for what is this but deceit?“ (from Jane Austen’s Lady Susan)

Sixteen-year-old Susan Smithson – pretty but poor, clever but capricious – has just been expelled from a school for young ladies in London.

At the mansion of the formidable Lady Catherine de Bourgh, she attracts a raffish young nobleman. But, at the first hint of scandal, her guardian dispatches her to her uncle Collins’ rectory in Kent, where her sensible cousin Alicia lives and “where nothing ever happens.”

Here Susan mischievously inspires the local squire to put on a play, with consequences no one could possibly have foreseen. What with the unexpected arrival of Frank Churchill, Alicia’s falling in love and a tumultuous elopement, rural Kent will surely never seem safe again…

So, Mr. Collins is her uncle, oh dear! We may see a bit of the non-sensical parson, or not… What do you think about Susan? You opinion of the adult one by Jane Austen or what you have just read. In here, she started pretty soon to be what we know about her in adulthood. I am very interested on reading this book and it is on my TBR pile for this year.

Let’s know a bit about the author of Susan, a Jane Austen prequel: Alice McVeigh.

Her first novel was optioned for filming by UK’s Channel 4; her Kirkus-starred thriller has just been long-listed for Chanticleer’s Cygnus Award; and Susan: A Jane Austen Prequel (Amazon bestseller in four categories in July) has been rated “pitch-perfect, 10 out of 10” by Publishers Weekly‘s BookLife Prize.

Alice is sharing a excerpt with us and I have enjoyed reading people talking about Susan, mainly Mr Collins! Enjoy!

After supper, Mr Collins uncorked his claret and addressed Edward: ‘And so, what say you, nephew? This deplorably self-aggrandising event is in only two days’ time. The play could scarcely be more ill-chosen; the performances are certain to be risible; and yet – when all is said and all is done – the fellow is our near-neighbour, and has been generous to the girls, besides.’

‘Too generous, sir, in my opinion.’

‘Perhaps, as you suggest, too generous. My dear Charlotte agrees with you. She fears they are distracted, to the great detriment of our connections at Rosings – and to Susan’s studies too. Which she was sent here on purpose to improve.’

‘That is of no great consequence,’ said Edward. ‘Susan will never attend to anything requiring application. Her fancy has always overruled her intellect – and always will.’

‘My own concern is more that the Johnsons’ influence might prove too great a temptation. Johnson himself is inexplicable! – He has hosted dances – inaugurated a hunt – and perpetuated every kind of display imaginable, even before the play! And yet he is also supporting your aunt’s new school, which shall bear his name. Without him, between ourselves, we could never have encompassed it.’

‘I have no such fears for Alicia, but Susan… You were not in town to observe the machinations by which Susan secured Lady Catherine’s good graces. Her ladyship, for my cousin, is no more than a means to an end. She does not comprehend the gulf that exists – and is intended to exist – between ourselves and such great people. In her mind, I grieve to say, there appears to be no gulf at all.’

His uncle thumped the table. ‘Precisely! Even her manners, at Rosings, seem entirely different! There is some genius to it, because her ladyship has always preferred young ladies to be reserved and discreet. Her own daughter’s spirits seemed sometimes low to the point of oppression before she was wed, though she has assuredly gained confidence since.’

‘My dear sir, though it grieves me to admit it, Susan can deceive. I have never, in the entire course of our lives, heard her employ a softer tone than she uses with her ladyship. As for pertness, you and

I might observe a thousand instances in a single day, yet with her ladyship she hardly ventures to comment! It is as if there are two Susans: one who is quiet, loves poetry and possesses a most ladylike wit – and the other, who is mocking and provocative and utilises her charm to her own advantage.’

Mr Collins very nearly banged the table again, but his hand still ached, so he forbore. ‘You have described her to perfection! – How ironic it is that the one true actor of the party has never been called upon to act! I know that this entire play – would that the notion had never occurred to Mr Johnson – greatly troubles your aunt, and that she will be exceedingly relieved when Friday is passed. Yet we cannot offend Mr Johnson – and does not her ladyship attend?’ ‘I believe so,’ said Edward.

‘But I have an ill feeling about this play, as does Charlotte – and her instinct is second to no one’s. What a fortunate day it was when she accepted me!’

‘I only wish that I might be half so fortunate. And yet, I did hear that she was not your first choice.’

His uncle sighed, and his waistcoat popped a button. ‘I am astonished that such a rumour ever reached you – yet such was, indeed, the case. Due to the reversion of the Longbourn estate, I considered it most becoming to choose a wife from amongst the five Bennet girls – and I visited there with nothing less momentous in mind.

‘Miss Bennet, an exceedingly sweet, pretty girl, being already spoken for, I made an offer for the hand of the second, who is now married to Mr Darcy. However, my cousin Elizabeth, doubtless already conscious of her own noble destiny, disdained me. Their mother then hinted that Miss Mary would bless herself at such an unlooked-for opportunity – but I had already conceived hopes of persuading your aunt to make me the happiest of men.

‘I shall never forget that day! I set off early – the sun had scarcely risen – to her father’s abode. Imagine my surprise to encounter her, all alone, quietly perusing her psalter – almost as if waiting for me. I can see her now, so composed, that dappled sunlight on her hair…’ He paused, in near ecstasy.

‘Such an occurrence,’ observed his nephew, ‘must have assured you that the marriage was destined to be – though very ill luck on Miss Mary, of course.’

I do apologise for not starting with Susan, but what about Mr Collins and his description of Elizabeth’s refusal and his “decision” of proposing to Charlotte? 😀

Now, what about Susan? She is cheeky, is she not? I like how they explain her behaviour and how she behaves when she is with Lady Catherine, for instance. She seems more than a handful already, it is not difficult to understand how she is later in life.

Are you interested in buying the book? You can do it on different places:

If you would like, here you have a few reviews of Susan: A Jane Austen Prequel.

From Pemberley to Milton

Do you prefer or do you also like audiobooks? The audiobook of this award-winning novel was released in October. You can read much more about this audiobook here.

Alice McVeigh is giving away one paperback copy for one winner who comments here. What do you think about Susan or Lady Susan? The giveaway is open internationally and it will finish on Sunday 9th of January 2022 at 23:59 CET. Good luck!