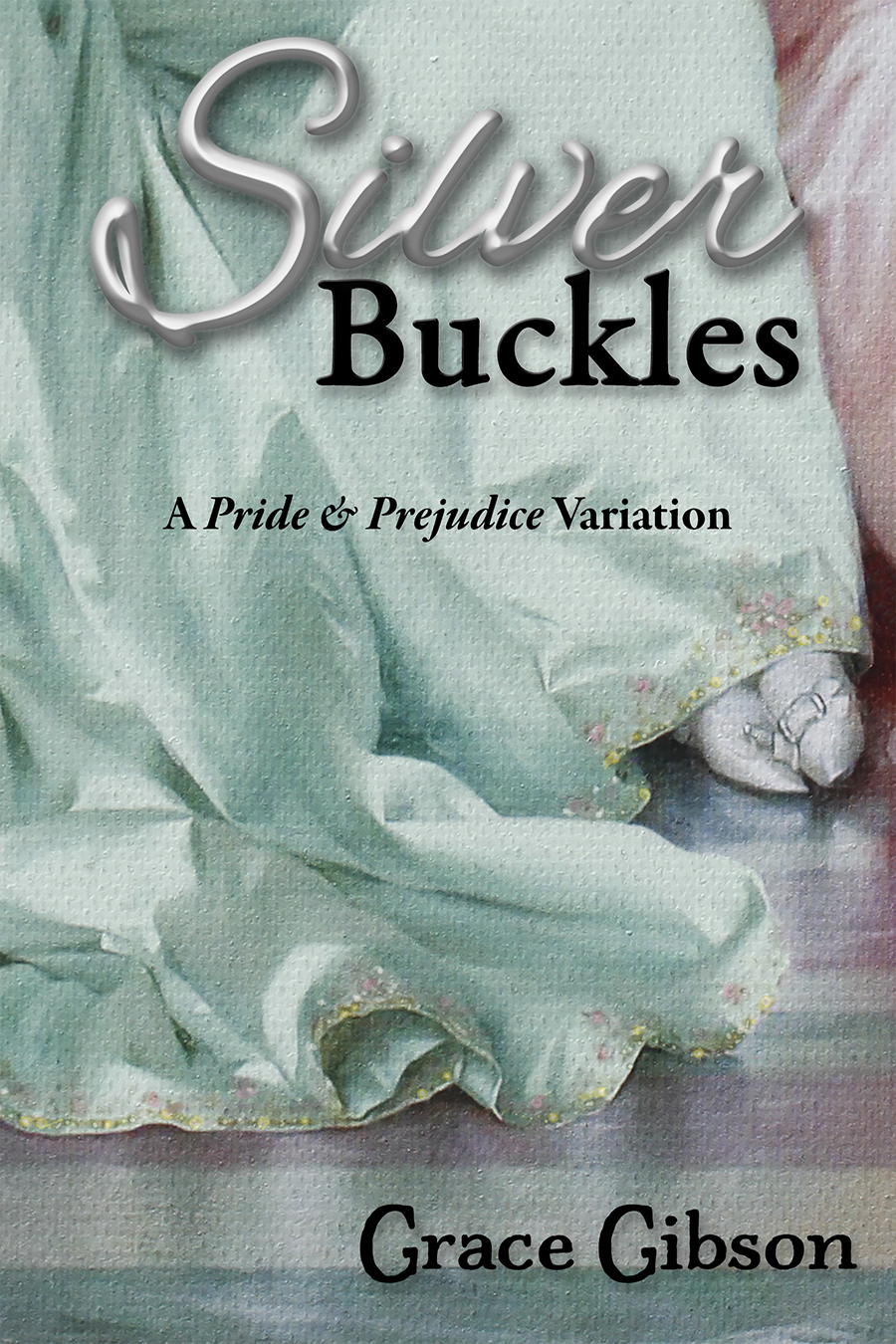 How are you doing? How’s everything going? I hope you are still healthy and safe. In order to have a bit of a break, I am very happy to introduce you to a new author here in My Vices and Weaknesses and she is presenting her latest book: Silver Buckles. How much do you like the cover? I simply love it!

She staggered a great man. He was reeling. She was overwhelmed.

Fitzwilliam Darcy, standing irritably at the edge of the Meryton assembly, declines to dance with Elizabeth Bennet. In a mood of revulsion, he rejects her without concern of being overheard. Country pretensions are always in need of squashing, and what better way to make clear he would not partner anyone outside his party? However, when he looks over at her, she does not appear humbled at all. She is secretly laughing at him!

Elizabeth is perversely delighted to encounter such an outrageous snob as Mr. Darcy. When he approaches her with a stiff, graceless apology, she coolly brushes him off, believing that, like most annoyances, he will go away when properly snubbed. But no! The man then puts out his hand and, not wishing to create a scene, compels her to stand up with him.

They go through the steps of the dance mutually disdainful and intent upon wounding each other. But by the time the musicians end their tune, Elizabeth and Mr. Darcy have traded barbs with such accuracy, they are unaccountably amused and engaged. Will this most inconvenient flirtation drive them apart—or, like silver buckles, are they a matched pair?

What do you think? I am really intrigued about that dance, about what they say, about what they think. Don’t you think that it may be really amusing to also be an outsider on this dance? Mainly if somebody has overheard his rejection.

You could tell Grace know your opinion about this blurb and about something else she is going to tell us today.

Today you are going to enjoy a bit of history together with an scene. I am pretty sure that you will like the comparison 😀 Let’s read what Grace has to tell us about Black Annis.

We are too close to Halloween for me to pass up the opportunity to talk about Black Annis.

The question is answered in Silver Buckles, my Meryton Press debut novel, when Mr. Darcy and Colonel Fitzwilliam refer to the witch of lore. Here is the first mention of this frightening hag.

We made the turn from Hunsford Village to the gatehouse of Rosings and passed the parsonage on the left. Since I happened to be seated on that side of the coach, I saw Mr. Collins in his front garden bowing and waving like a pestilential flag. Next to him stood three ladies, and one of them, I would have sworn, looked like—

“What is it, Darcy?” Richard asked when I sat up abruptly on an inward-drawn breath and nearly hit my head on the roof.

I struggled to regain my composure. “Nothing—only my posterior is beginning to suffer from so much travel. I shall be very glad of a walk.”

“Which you will not get. We shall be dragged into the parlor to stand in front of Black Annis while she sharpens her iron nails.”

I remained unsettled, but Richard’s joke distracted me. When we were boys, we referred to Lady Catherine as Black Annis, a witch of lore who ate lambs and children and hung their skins outside her hut.

What? A witch who eats lambs and children?

This gruesome hag was said to live in an oak tree, and she went out hunting at night. After eating her young, tender victims, she was reputed to have tanned their hides and worn the skins around her waist. If that’s not horrible enough, legend has it that she snatched people out of their houses through their windows, and her howls could be heard as far away as five miles! Parents warned their children that Black Annis would get them if they didn’t behave, and I wonder if that wasn’t the most effective scare tactic ever conceived. It certainly would have frightened the life out of me! Our traditional witch with her frog’s blood and warts, riding her broom in front of the harvest moon, seems almost benign in comparison.

But let’s get back to Black Annis, er, Lady Catherine de Bourgh.

Our relation was, in truth, a self-consequent bore, and before I could think, we were making our bows in front of her as she sat in an elevated chair with a faded velvet footstool.

No sooner had we said what was required than our cousin Anne was called. She dragged herself forward with a great show of suffering before wordlessly sinking in her chair and looking at us in a pucker of resentment. Whether the girl was truly ill or only ruined by such a stupid mother I could not decide. In either case, she was an awkward occupant of any room, for she refused to speak if she could avoid it.

“I see you look at Anne, Darcy,” Lady Catherine said with satisfaction. “She has improved, has she not?”

Road weary as I was, I had not the temper to play this game. I turned to my cousin and said, “Have you improved Anne? Are you feeling stouter this year?”

This was not the improvement my aunt had in mind for me to notice, and she sought to bring attention back to herself by trying another tack.

“We shall have company for tea. My parson has married, and his wife’s sister and friend from Hertfordshire visit. With Mrs. Jenkinson and both of you, we shall fill out two card tables. I do not let Mr. Collins play. Darcy, you will sit at Anne’s table. Anne, you will play,” she said as she motioned for her butler. “Benson, see the tables put up before tea.”

Struck perfectly dumb, I sat for a quarter of an hour as mute as Anne, leaving Richard to shoulder the burden of entertaining my aunt. Once released to refresh myself, I staggered up to my room. My mind reeled, my body thrummed with anxious disbelief, and the words, “Elizabeth. Married!” ran round and round in my head.

Then I knew what I had refused to admit before. I harbored some idea of having the lady myself. Not only did I harbor this notion, I had come to regard it as a settled course, and worse, like any self-possessed savage, I had become overtly possessive of my woman.

I hope this Halloween treat sparks your curiosity about Silver Buckles, and Happy Halloween from Black Annis! Bwahaha!

I am pleased to have joined great bloggers in this blog tour and I highly recommend you to check the previous posts because you will get to know much more about this Elizabeth and Fitzwilliam.

19th of October  Babblings of a Bookworm

20th of October Interests of a Jane Austen Girl

22nd of October Diary of an Eccentric

26th of October From Pemberley to Milton

27th of October My Vices and Weaknesses

Would you like to buy a copy? You could do it here among others:

Meryton Press is giving away 8 eBooks of Silver Buckles for 8 winner. You just need to click the link below and follow instructions. Good luck!