“Mr. Darcy, I am eager to hear your explanation for the fact that quite a few people believe we are engaged.”

Ok, hello to all! Let’s stop here because if a blurb starts with that sentence, the book must be in want of a reader (or hundreds). How can we read this sentence and not having an urge to read the book described? Let me tell you, you have to read it as soon as possible! However, I will allow you to read the rest of the blurb first 😉

It starts with a bit of well-meant advice. Colonel Fitzwilliam suggests to his cousin Darcy that, before he proposes to Elizabeth Bennet in Kent, perhaps he ought to discuss his plans with their families first.

What neither man could have predicted however was that Lord Matlock would write the news to his sister or Viscount Saye would overhear, and tell his friends, or that his friends might slip a little and let their friends know as well. The news spreads just as quickly through Hertfordshire once Mrs Bennet opens the express Mr Bennet receives from Mr Darcy, and in a matter of days, it seems like everyone knows that Mr Darcy has proposed marriage to Elizabeth Bennet.

Everyone, that is, except Elizabeth herself.

Her refusal is quick and definite—until matters of reputation, hers as well as Jane’s, are considered. Then Mr Darcy makes another offer: summer at Pemberley, so that Jane can be reunited with Mr Bingley and so that he can prove to Elizabeth he is not what she thinks of him. Falling in love with him is naturally impossible…but once she knows the man he truly is, will she be able to help herself?

Chinese Whispers are a joke compared with the gossips among the ton: from admiration, to love and to matrimony in a second! Well, not in this case though.

Back to what is important, a summer at Pemberley!! Well, maybe is not the most important part but it is THE PLACE. The place for love ❤ or not… I will let you know later on on my review.

Let me (re)introduce you to Amy D’Orazio, the author of this great read.

Amy D’Orazio is a long-time devotee of Jane Austen and fiction related to her characters. She began writing her own little stories to amuse herself during hours spent at sports practices and the like and soon discovered a passion for it. By far, however, the thing she loves most is the connections she has made with readers and other writers of Austenesque fiction.

Amy currently lives in Pittsburgh with her husband and daughters, as well as three Jack Russell terriers who often make appearances (in a human form) in her book.

Amy’s other releases include A Short Period of Exquisite Felicity and the The Best Part of Love, a Readers Choice Gold Medal Winner for 2017. She has also contributed short stories to Dangerous to Know: Jane Austen’s Rakes & Gentlemen Rogues, Rational Creatures: Stirrings of Feminism in the Hearts of Jane Austen’s Fine Ladies and Yuletide: A Jane Austen-inspired Collection of Stories.

If you want to follow Amy’s writing, you can do it here:

Lately I am finding quite difficult to write reviews without spoilers. It could be because lately I am not writing many reviews on the blog as I barely have time, or maybe it is the author’s fault! Yes, you read it, the author’s fault for writing such a good book that you just want to tell people everything that is going on!

However, I will try to stop myself and just tease you with the review. I hope you like it.

Once upon a time, there was a proud gentleman who was in love with a lady who refused him… Apparently he did not get it the first time and then he decided that he would propose again but checking with his family first, and then with hers. Tiny problem: he forgot to check with her.

Elizabeth was determined to reject him (again) but she then considered her reputation and her sisters’ and gave him an opportunity to “court” her… in Pemberley!! Elizabeth did it also for Jane’s sake as she was supposed to be reunited with Mr. Bingley (thankfully it did not happened… I leave it there! You will have to read the book to know more).

Elizabeth followed her sisters words “Offer your friendship to him, and I think you will be surprised where it leads you”. Elizabeth did and even if it was a bit annoying that her sister, after everything Mr. Darcy did to separate her from Mr. Bingley, recommended her to be nice to Mr. Darcy.

You can imagine what Mr. Darcy is feeling during the book: remorse, regret, guilt. Everything that he could feel, he will feel it because he is soooooo maddening in this book! but we love him anyways. You will read how much he puts on his shoulders, he blames himself or takes responsibility about anything and anyone. Jane Austen was really nice to him compared to Amy D’Orazio! Even the weather may be his fault xD However, Elizabeth and the other characters are there to make him realise that it is not his fault.

Talking about other characters in A Lady’s Reputation, I have a favourite, apart from our main protagonists, and that is Viscount Saye. He is hilarious but he is loyal. He is Darcy’s cousin, the eldest brother of Colonel Fitzwilliam who also appears in the novel and is as usual, very charming. He jokes, he teases, he is somehow a bit liberal, he is engaged to be married to a nice lady, she is a minor character but important enough to appear. Even when she does not talk, the mention of her is important as Saye is all over the place.

Let me give you another “tiny” interesting detail: in this book, Darcy never gave Elizabeth a letter defending himself of the two accusations she gave him on her rejection. She does not know about Wickham, yet.

I was not able to put the book down (in this case my kindle) until I finished the most spread engagement-not-engagement on the history of JAFF! I highly recommend the book, it may be that you want the HEA to happen quicker than it does but everything is worth it.

You could buy the book here if you cannot wait to read it:

You are encouraged to visit all the stops on the blog tour and comment. You are going to enjoy a lot following all this tour.

Quills & Quartos Publishing will be giving away one $50 Amazon gift card to one enthusiastic follower! You get one point for every blog stop you visit and leave a comment. Good luck! 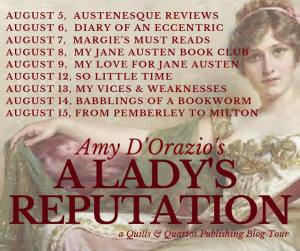 40 thoughts on ““A Lady’s reputation” by Amy D’Orazio, review + giveaway”