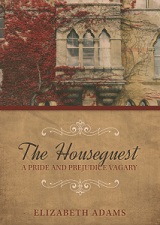 What a torture if you have the love of your life at home during three weeks and you are clueless of how to behave! (apart from a gentleman-like manner, obviously!)

The Houseguest by Elizabeth Adams is a very nice variation of Pride and Prejudice that starts after the Netherfield ball and we can see an active Georgiana asking her brother permission to go and visit him and Mr Bingley in Hertfordshire. As usual, Mr Darcy cannot deny anything to her lovely sister, so she arrives to visit looking forward to meet Miss Elizabeth Bennet, a neighbour who has been mentioned several times in Darcy´s letters.

Elizabeth and Georgiana become “besties” quite quickly as Georgiana is in need of female companionship. Darcy is content for her sister as she is happy having a friend to share things with.

What we know next is Darcy coming back to London after a trip to Somerset where he helped some family members to manage their state. Darcy is always the perfect relative… yes and no, he totally cares about his family but he also needs to forget Elizabeth as he thinks he must do his duty and marry properly. As I mentioned, he arrives to Darcy House in London and he has a guest, his sister’s best friend and the woman he loves.

Fitzwilliam Darcy struggles as he tried to be polite but not too involve with his houseguest. However as the Spanish saying more or less says “with the contact, affection grows” and in this case Darcy cares about her and having her in his house it is a big torture. After some time, he realises that he is his own master and he should not care what other people thinks about his choice, he chooses love, he chooses Elizabeth. Here starts his plan to conquer her heart but we know how Darcy is, very determined but sometimes he does overlook the feelings of others. How is he going to react when there are possible suitors for Elizabeth encouraged by his own aunt Lady Matlock? How is he going to behave in a silly snow game? How is he going to react when Elizabeth disappears without leaving any explanation apart from a short note to Georgiana? How is he going to act when he realises that he is the only one to blame for her running away?

“I merely heard something that I was not meant to hear and it was not pleasant, and now I find myself rather disillusioned.” (Elizabeth said)

You need to buy and read The Houseguest by Elizabeth Adams in order to answer all this questions and see if Elizabeth and Darcy are able to find love together and if so, how are they going to do it?

“Would you like to hear about naughty little Lizzy, or troublesome Elizabeth?” (Elizabeth)

I would like to mention Lady Matlock as she has been a very nice character to follow and she is quite similar to Mrs Bennet in “hobbies”.

Here I leave you with one lovely dress. Why do I put this picture? Read the book 😉 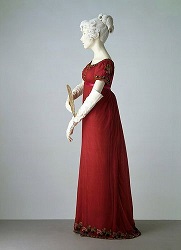